The coldest winter I ever spent was summer in San Francisco.
– Mark Twain –
In a matter of five days, my family and I conquered Northern California with exploration of San Francisco’s treasures including Coit Tower, Waterfront, Alcatraz Island, Lombard Street, Mission/Valencia Street, Haight-Ashbury, and countless cafés/eateries; Napa Valley; small town Mariposa; and Yosemite National Park.  We already talked about the first four, so let’s delve deeper into the uniqueness of the other areas…

At the epicenter of a wine drinker’s universe, and happily nestled between rolling California hills, lies Napa Valley.  Here, hundreds of vineyards appeal to a myriad of wine drinkers, ranging from sparkling wines to family-owned custom recipes to more scenic than tasty vineyards.  En route to our first destination, we stumbled upon a family-owned winery (V. SATTUI), where we purchased fresh Italian paninis to enjoy in the picnic area amongst peonies and fountains.  Once fueled for a day of grapes, tannins, and crystal-clanging, we headed to BERINGER VINEYARDS for a complete vineyard tour.  Dating to the Prohibition Era where the vineyard managed to remain open to make church wine (smart, eh?), Beringer wines are rich in history.  We received hands-on education in pairing wine with food (mixing flavors with different wines to maintain a balance), wine-tasting techniques, and the history of Napa Valley.  In underground cave on the estate, we even previewed a Cabernet Sauvignon currently aging in a barrel, which will not be in stores for purchase until 2016. Overall, the tour was impressive combination of entertaining and educational!

Thereafter, we enjoyed the sights at ROBERT MONDAVI WINERY sans wine-tasting as my family and I were unimpressed by the crowd, preferring to gander at the expansive field and art gallery. We then journeyed to THE HESS COLLECTION, which was pleasantly located off the beaten path.  From the parking lot, a hillside of grape vines was visible, there was not a single car engine rolling by, and silence was like music to our ears.  We happened to arrive as the courtyard closed, but it did not prevent us from tasting a variety of Small Block Series wines in the elevated tasting room.  The wines we tasted here were my absolute favorites of the day.  In white wine category, Small Block Series Gewürztraminer (Vintage 2013) won and, for red wine, Small Block Series Malbec (Vintage 2012) triumphed.  Had it not been for the fact that I did not check luggage at the airport (I prefer carryon when possible), I would have purchased a few Malbec bottles to bring home and enjoy at a later date (they were that good).  The challenge will now be to find the wine at home, but apparently Small Block Series are pretty much never to be found in stores.  *Sigh* keep your eyes out. Nonetheless, we decided to purchase a bottle of Gewürztraminer (family preference) to enjoy in the parking lot overlooking the hills while eating wine and cheese. Perhaps this was not the most classy way to go about our evening snack, but we were happy to be united in the peaceful silence of the vineyard.

Well worth the additional detour after Napa Valley, our family hit Russian River Brewing Co. in Santa Rosa.  There, we enjoyed the famous Double IPA–Pliny the Elder–in addition to tastes of Damnation, Sanctification, and Consecration.  All were delicious, and all 150% worth it.  Note: They also have a flight of all 19 beers on tap. Perhaps this will be something to tackle in the future? In this region, a magnificent bookstore was also discovered–all used, cheap, and pure.  I was in heaven. More on my new obsession with bookstores at a later time.

I undoubtedly consider myself a hippie at heart.  I mean, I literally went on a scavenger hunt for the perfect tree to hug at Yosemite National Park (more on that later) and embrace the love the the world daily.  Thus, this district of San Fran was far from disappointing.  The first shop we walked into (LIFE) sold its own handmade incense such as LOVE and MEDITATION (I bought five of each). Cafés, book, and record shops line the street, which is decorated in artful graffiti and psychedelic designs. I stumbled upon Café International where iced coffee is chilled with coffee ice cubes (genius), Almond milk is accessible (rare), inviting couches line the walls, and a backyard atrium painted with flowers and various worldly images created a perfect environment for coffee sipping.  Other shops including natural herbs, tie-dye clothing galore, gems, and punk/rock T-shirts made for a vintage and rare feel in this area.  It was one of the first times I actually got a vibe from an area in San Fran.  Most other areas felt a wee bit too tourist-driven for my taste.While walking back to the car, I was struck by a powerful sight truly worth highlighting.  A young man in his wheelchair (I am unsure, but he appeared to have bilateral lower extremity amputations) was receiving Spiritual healing from a passerby.  In this bus stop station, appropriately behind a sign MAN*KIND, you can see the hand above the man sitting in the wheelchair.  You cannot see his face clearly, but as I walked by, I saw his peace and engagement in this process.  Here he is being ENABLED–healed–and BLESSED with the kind nature of another man.  Sometimes, human nature truly strikes me as beautiful.  This is one of those times.  Thank you. 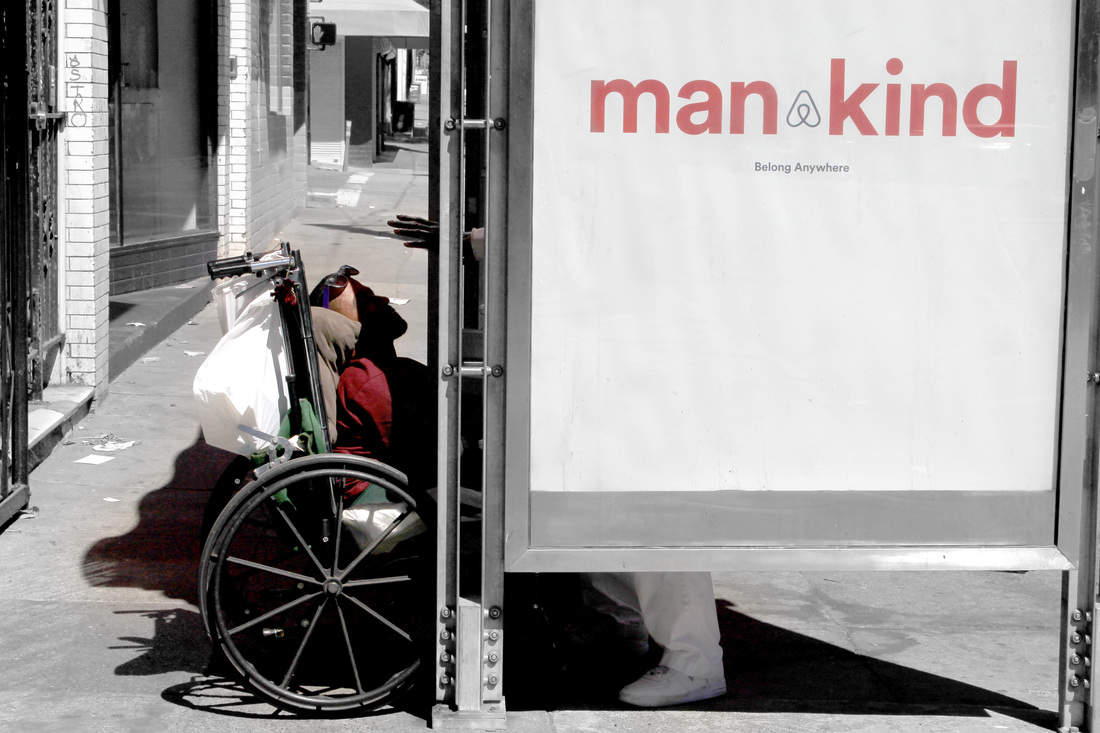 WOW.  How does one begin to describe the marvel of Yosemite National Park? Let’s start with a quote from John Muir:

I only went out for a walk, and finally concluded to stay out until sundown, for going out, I found, was really going in.

Humbling in its beauty, Yosemite National Park is somewhere I will return to for further appreciation of its immaculate beauty.  As we drove past the campgrounds, I envisioned myself there in the future, sleeping amongst the stars and natural wonders.  In this chapter of Yosemite Adventures, however, rock climbing was the main objective.  Yes, ROCK CLIMBING IN YOSEMITE NATIONAL PARK.  Okay, I’ll say it again: I went rock climbing in Yosemite National Park (with my hardcore brothers & father).  No, I didn’t conquer El Capitan or Half Dome, but the mere fact that I was touching and scaling natural rock at such a prestigious location was enough for me at this point. I learned to belay a lead climb, and then took the gear out as the first to ascend the climb.  I achieved a 100-foot, level 5.10A with impressive difficulty in some sections.  I learned to trust the friction of the rock, sometimes not even finding a foothold to use for propelling upwards using my legs.  I accepted extra challenges by subtracting easier holds from set paths.  I engaged my inner SpiderWoman and loved every second of it.  During rest periods, we lounged in my ENO DoubleNest Hammock between two sequoia trees.  Hours of active climbing with our chill and knowledgable guide, Miranda, led to unavoidable bruises on my lower extremity, ultra-sensitive fingertips from gripping scalding hot rock and crevices, and a sense of accomplishment/domination.

I was overwhelmed with gratitude for nature throughout the day, and nearly lost my breath when standing in a field beneath Half Dome.  At this time (~4:30pm), there was a gridlock of cars stopping along the valley’s road to snap photos at various vista points.  I did not feel this was an appropriate or necessary way to pay homage to nature (except for our Half Dome viewing), so we created a new goal: FIND A GIANT TREE! Apparently, the two sites within the valley to see the massive, well-known sequoia trees are CLOSED for preservation.  I understand the idea of preserving the trees and actively waking them back up from the horrific California drought.  But.  The trees are CLOSED? When is nature ever closed? It’s always irked me, for example, that beaches on Long Island, NY close after dark. IT’S A BEACH – IT’S A TREE – IT’S NATURE! Mother Earth should be accessible to us at all times. Perhaps the people who do not respect Gaia are ruining it for us all.  They plague the land with lack of appreciation, and leave destructive trails where they walk.  But I digress.  My mission to hug a giant tree was engaged, and if I couldn’t do it in the valley of Yosemite, I was going to find one elsewhere.  We left the valley to drive along The Big Oak Flat Road and stopped Tuolumne Grove to walk along self-guided nature trails.  My brother ventured into the forest with me where we found a huggable tree, got some tree sap on our arms, and happily walked away smelling like pine.  Curiosity struck me to ask a passerby if even bigger trees were anywhere within the confines of this particular area.  They pointed my brother and I down the concrete path, stating the sequoias were a mere half mile away.  We SPRINTED down the hill (not considering the hike up, and definitely averaged a mile away rather than 0.5 miles) until we saw it.  It was God-like.  It literally stopped me in my tracks, and I approached slowly and gingerly as not to disturb it.  Its bark was unlike anything I’ve ever seen, probably the size of my torso.  It reached toward the sky with magnificent power.  The sunlight shone through its branches like light from heaven, showering the forest’s grandfather tree with fruitful love to encourage abundance of life and prosperity.  Signs surrounding the divine representative of Gaia warned to maintain a safe distance to support continued efforts of preservation.  Despite my desire to touch the tree, I respected its wishes and blessed it with gratefulness for its existence.  With kind eyes, I deeply wished upon the tree a lifetime of fertility. Sadly, nature has taken its course in California as previously green areas are turning brown.  The drought has severely affected Mother Nature, but I am praying and meditating on the fact that nature will transition from lack to abundance.  Help if you can! Make it rain!

Please comment: Have you ever been to any of these areas? What did I miss? What did you learn?

Special thanks to Northern California’s natural beauty and the best family in the world for making this a memorable trip.  Until next time, my traveling friends.
Share content:
San Francisco, Part One Follow Your Dreams: Moving to Florida

Serendipity and a Quick Trip to Northern California