The second weekend of November 2016, I was ready to soak in some serious Pacific Northwest autumn. I’d been curious about the Columbia River Valley and, as cliché as Multnomah Falls seemed, I was ready to see what it was all about! I had been stalking photos of the falls for a few months and had to add the classic photo to my repertoire, of course.

Walking around Multnomah Falls in Oregon was invigorating! You could feel the power of the water from hundreds of feet away! It was a great energy preparation for the 13-mile trail run/hike along Eagle Creek trail to Tunnel Falls (which was completed in about 3.5 hours). Read on for some photos! The 611-foot raging falls were first visible from I-84E and, with a simple 5-minute walk, we were standing beneath a force of nature that cannot be adequately described. On Benson Bridge, we got splashed with the first tier’s 542-foot falls, as we looked below at the 69-foot drop-off of the second tier. There were paths meandering around the bases of the falls and various smaller waterfalls, plus a stunning overhead view of the falls and Columbia River Valley.

A special bonus of this trip was the Coho Salmon festival going on! This meant tons of Coho salmon meandering their way through the runoffs of the falls. They were HUGE (and difficult to photograph). I love how much the Northwest loves salmon! Just two miles into this trail, Punchbowl Falls gave us a quick taste of falls before the remainder of the hike, which consisted of a myriad of waterfalls. I actually didn’t even bother counting! The trail hugs along the wall of the gorge, and constant views of a creek below are granted graciously (unless you have severe fear of heights). At times, there are even ropes along the path due to the slippery rocks and potholes. As water dripped from the mosses and the sun shone between maple leaves, it felt like an enchanted forest.

Walking/running a total of 6 miles, we finally dawned upon Tunnel Falls! Carefree, I reached beyond rocks, placed my hand in the falls, and let it soak my body and spirit! I felt so alive! We walked through the tunnel behind the falls, popping out to its glory on the other side… how thrilling! Thank you to the man who pointed us beyond Tunnel Falls to the 200-foot Twister Falls (AKA “Crossover Falls” or “Eagle Creek Falls”). This trail certainly deserves all its popularity and, honestly, we saw <15 people the whole time on the trail (or maybe we were running past them and didn’t notice them?).

Worth it? I think so. Classic Oregon and Columbia River Valley has won me over. 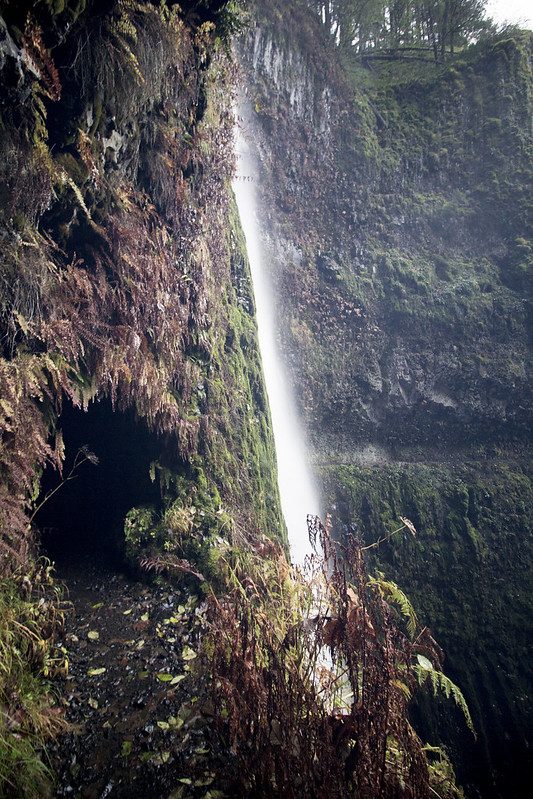